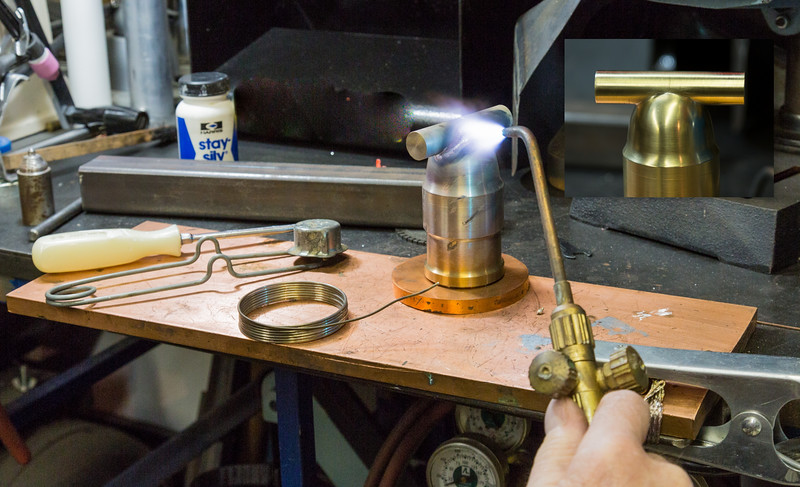 Silver Soldering in the Shop

With the parts for the barrel of my 24-PDR Coehorn Mortar M-1838 built and ready to be joined together, the best method is through the use of 45% silver solder.

Over the years I have used this method many time over, and there is some skill required to achieve good silver soldered joints in the assembly of the parts using this method.
Also regardless of the material to be joined together whether it be brass or steel, the joints to be soldered need to be scrupulously cleaned before attempting the soldering.

I always use a aircraft style oxyacetylene torch which is sized especially for silver soldering in my shop. This small Purox torch is especially suited for this type of work, as the temperature that 45% silver solder flows at, is approaching 1200 degrees F. I did have to use my largest tip for this job, as the size of the two parts being joined required a fair amount of heat to get them up to the temperature required to flow solder.

Just so you know, I had just laid down the coil of 45% SS in the photo, as the parts had reached the critical temperature for soldering, and if you expand the photo and look close, you can see where the solder had flashed through the joint between the barrel and the rear trunnion upon applying the solder.

The insert photo shows how it looks after the cleanup.