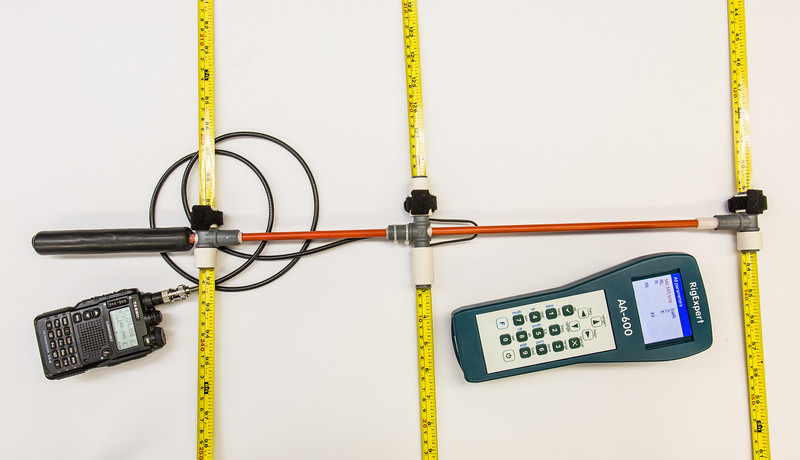 Note..this is a prototype takedown yagi without boom couplers and other refinements as in the latest version of the TD-TENNA seen by clicking on the link below.

I like HT'S and have one or more handi-talkies with me where ever I go.

Now for the past 20+ years I have built and carried some form of a portable 2 meter yagi that goes with me everywhere. I have built and used various takedown yagis over the years, but I have always felt that there were features that were lacking in the various designs that I came up with and built.

So after recently building the DF Tape measure 2 meter DF yagi designed by WB2HOL as seen by following the link below, I realized that tape-measure-elements was the perfect solution for what I had been looking for to make a very portable antenna for my needs.

The biggest problem has always been to design and build an antenna that could be taken down and stored in my radio go-box, but also could be carried in my fly-fishing chest-pack.
Now you may ask as to why I needed a yagi that I could carry while fly-fishing a high mountain stream, and I will answer that now.

For example one of my favorite streams that I fly-fish is the Sheep river west of Turner Valley. The far reachs of the Sheep are located in a deep canyon up against the front ranges of the Rockies, and once you make your way down to the river located on the canyon floor, you can throw your cell-phone away as its useless with no signals available.
Now in the past I realized that my Kenwood TM-D710A set up in crossband repeat would be perfect in case I got in to trouble while wading up or down stream several kilometers away from my mobile.
In theory this sounds good, but the problem was that an HT running 5 watts with a rubberduck antenna, or even a higher performance HT mounted antenna just couldn't make it in to my mobile reliably once I got some distance away from my mobile.

In the past, I had taken one of my portable yagis with me, and that was the answer as I could now easily communicate with my mobile, but the problem was the portability issue, as the yagi didn't takedown to a small enough package, and it proved to be annoying while fly fishing.


So now we back to where I discovered through the WB2HOL design with its tape-measure-elements was part of the answer to my needs.
The other requirement for the ultimate portable yagi, was some means of breaking the boom down to a more manageable size, allowing the complete antenna once taken apart, to fit into a space measuring approximately 9"X10".

After spending time working at my computer, I came up with a design for a takedown yagi that once dismantled measures a tiny 2"X6"x9"

Now with a set of drawings to work from, I needed a name for my antenna, and after some time spent coming up with a name, my TD-TENNA was about to become reality.

A visit to my favorite antenna supply store, that being Home Depot to acquire antenna parts, and I was good to go. Now understand I am having fun at your expense, as Home Depot don't really sell antenna parts, although I seem to be able to find a lot of what I require to build antennas while browsing the aisles of their store.

I soon had a prototype antenna built, and once I had it tuned to my satisfaction, and tests performed with it, I knew I had a winner. This tiny takedown yagi is proving to be what I wished I had along with me while in the back-country while fishing, hiking, or just about any reason you can think of where you need more reach with your handi-talki than what a rubber-duck antenna will provide.