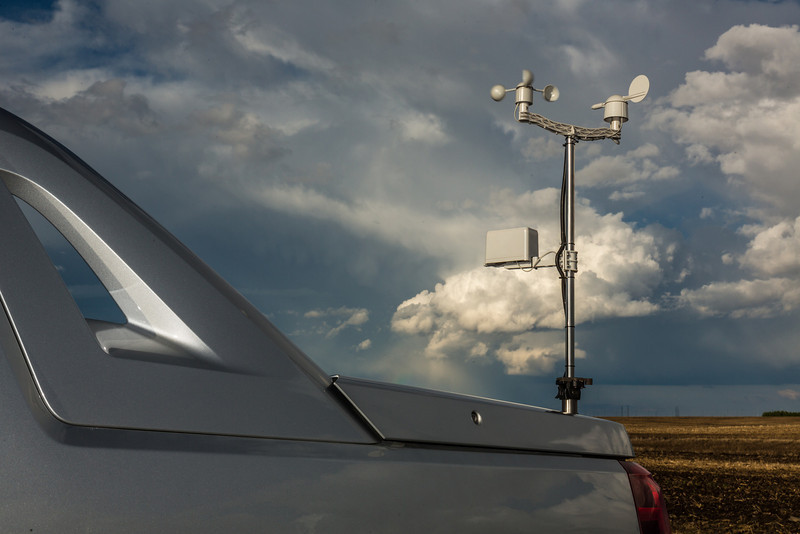 NOTE....I now have a dedicated mount for the weather sensors that sits directly on the roof of my mobile.

I was pleased with the thunderstorms that appeared on the horizon within the same day that I finished installing my mobile APRS weather station, allowing me to capture this image.

The install was a bit of a challenge, as the Argent Cable ADS-WS1 weather station was not designed for a mobile installation, but is meant to be installed in a fixed location.

Well that would be to easy, as I wanted a weather station that was first APRS capable, and second capable of being modified for mobile use.
One of the challenges I had to overcome was that the ADS-WS1 electronics module does not support a GPS receiver, as it is assumed that being it would normally be at a fixed location, you manually enter in the lat/long coordinates for your location and call it done.

Well that was not going to work for a weather station that is on a mobile, so I came up with a solution, and that is another Argent Cable device being my Opentracker OT3m.

The OT3M does support a GPS receiver, and fortunately there are two serial ports on the board of the OT3m, so I was able to connect both serial devices, that being the GPS receiver, and the ADS-WS1 weather module

I was a bit worried about how they would pass data to the OT3m, as it has only one external serial port, although there are two serial ports on the board.
However by using a serial splitter cable, and with my laptop and the config program for the OT3m, I set the A port for 4800 baud as required by the GPS receiver, and configured the B port for 2400 baud as required by the ADS-WS1 module.

Once I had the OT3m and ADS-WS1 configured, and holding my breath, I forced a beacon from the OT3m, and Eureka!
My ABWX weather station was being decoded by my Kenwood TH-710A and the weather screen on my D710A with it weather symbols was reading out the temperature, humidity, barometric pressure, wind direction, wind speed, and the rainfall. This information was also appearing on aprs.fi on the Internet as well.

With that out of the way for the moment, I proceeded to build a mount for the up top weather sensors with included mast to be mounted on my mobile.

Now there are times that I do not want my weather mast assembly on my mobile, so with that in mind, I built a mount that couples to my HF mount normally used with my HF antennas.

The mount took some design work, as remember the part about the fact this weather station is on a mobile that will be parked on inclines and pointing in various directions.
So the mount I came up with allows me to pivot the sensor array to position the anemometer/wind direction assembly on a East/West direction, with the anemometer on the West end of the boom as required for the wind direction sensor to report the proper information .

The mount also has an adjustment that allows for the mast assembly to be squared off with the help of a built-in bubble level. This is required for the self-empting rain gauge to register correctly, as well as to allow the wind sensors to function correctly. Once the assembly is positioned on the mount of my mobile, It only takes seconds to make it plumb, and then I can turn to checking out that very cool looking sky.

I am still fine-tuning my VE6AB-8 APRS weather station, and one of the things I have going on, is a small 40mm diameter aspiration fan as part of a 1.5 inch tube assembly, that draws outside air and passes it through a additional opening that I cut in the ADS-WS1 module, before exiting at the far end of the module where the temperature and humidity sensors are located on the board.

The electronics may be seen and are described in this link.....