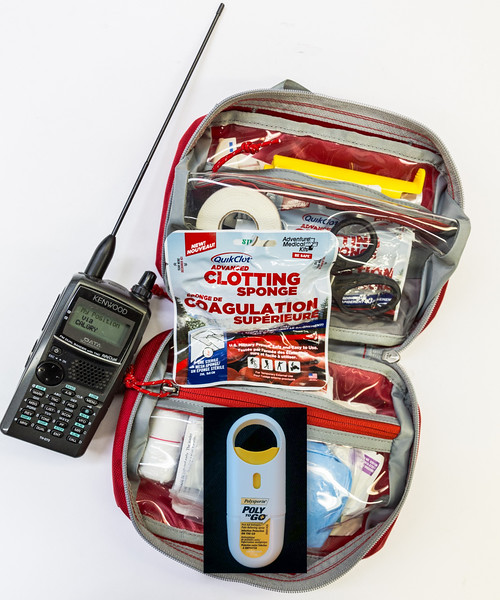 So as you probably have figured out by now if you follow me on my blog, or have read the information I share with you through my various ham radio galleries on my website, as to how I stay prepared for any mis-adventures that may happen to me while I'm out and about.
Well I got to test out one of these products recently, kept in my first-aid kit.

I had just returned home from a 8 day road-trip to Vancouver, and getting up early the next morning, I headed down to an area bordering the Bow river south of Langdon Alberta where I planned on clearing some of the cobwebs from my mind.
I also planned on producing some nature recordings with my Sony digital recorder attached to my Rode shotgun mic, and I also had my camera and several lens along.
Now I didn't plan on getting to far from my mobile, so I wasn't too concerned about what else I should take along, and thinking.....'what trouble could I possibly get in too!'

I hadn't hiked more than a 1/2 a kilometer from my mobile, and was cutting a new trail in unfamiliar territory, when I had to stoop to cross through a boggy area with low hanging branches where the brush was quite thick.
At one point I though I was in the clear, and standing up abruptly, I bashed my head into a horizontal tree branch, with the branch about 3" in diameter.
We have all done this at one time or another, and thinking to myself "x%$#@*&^%$ that hurt" while assessing my head with my hand, I realized it was more serious that a bump on my head, as my hand came away covered in blood, and then blood started streaming down my face in small rivulets.
Looking at the branch where I hit my head, I could see where a pointy nub that had been a branch broken off previously had driven itself into my head causing the wound that was now bleeding profusely.

I quickly headed for my truck diverting the blood from my eyes with my hand, and by the time I arrived back to the location of my mobile, the front of my jacket was covered in blood, as well as on the front of my jeans.
Fortunately I never leave home without my first-aid kit carried in my emergency preparedness storage box, and after assessing the situation by looking in the mirror I could see where the wound was on the front right top side of my head.

Now this is where I mention a new product that I purchased at MEC here in Calgary several months ago, to be added to my first-aid kit.
This is a blood clotting product developed for use on the battlefield to deal with serious wounds called "QuickClot Advanced Clotting sponge" and the one MEC stocks is packaged by "Adventure Medical Kits."
This particular blood clotting product is a civilian version of the military version developed in the US.
The QuikClot® advanced clotting sponge puts blood-clotting power in the palm of your hand, and is made from zeolite beads in a sterile, non-adherent mesh bag. You simply apply the clotting sponge over bleeding areas to speed clotting.
Zeolite, a common mineral, helps blood clot up to three times faster than blood on its own, and after tearing open the vacuum packed sponge, I applied it to the wound on my head for about 20 minutes.

After this amount of time, the blood had clotted in the wound, and with the flow of blood stopped, I then applied a first aid antiseptic spray also carried in my first-aid kit called "Poly To Go" by the makers of Polysporin.
After arriving home, and taking a shower to clean the dried blood off of myself, the wound was still holding fine, and a day later the swelling caused by the bash to the head has diminished, and the wound is looking and feeling good.
To be sure that I suffered no infection in the wound, I continued to apply the antiseptic spray several times a day for several days.

I now am a believer in this QuikClot product that I purchased at MEC here in Calgary, and I don't plan on leaving home without it from here on in.
At the time that I purchased the two packs to store in my first-aid kit, part of my go-kit kept in my mobile, I thought they were on the pricey side, but not anymore.
I have already returned to MEC and replaced the one that I used on that day with another one.

Something that I've never mentioned on my website or blog before, is the fact that a number of times over the years I have taken a first aid course put on by St John Ambulance located here in Calgary.
The first time I took this course years ago, it was mandatory as required by a company I worked for at the time, as well when I worked at another company some years later. Over the years I have taken it upon myself to upgrade my first aid qualifications on my own also.
I highly recommend that you take the time to do this, as a little knowledge in practicing first aid can serve you well down the road as it did me on this day, and has several other times over the years for myself and others.