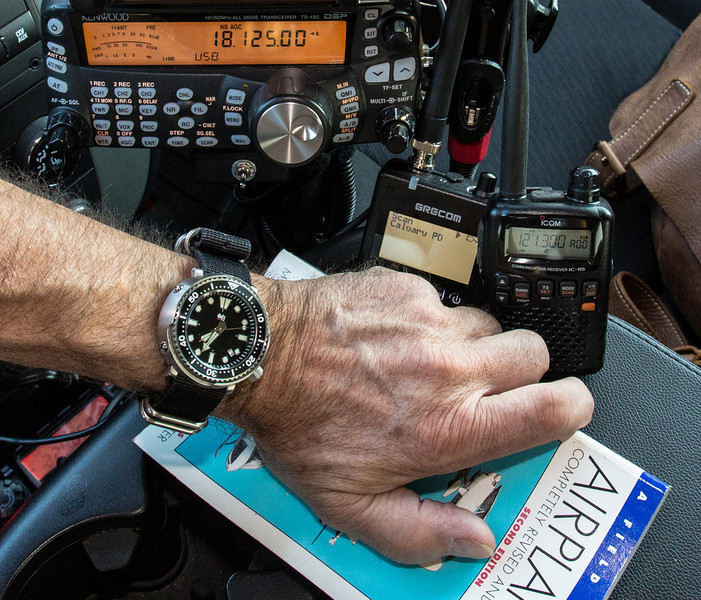 You may not be aware that I like time pieces, not only clocks, and I do have a number of them, but I also like watches, analog watches that is.

Today watches are rapidly disappearing from most people's wrists, probably because everyone carry's a cellphone.

I still wear a watch on a daily bases, as I like wristwatches, and on this day, I am wearing one of my favorite watches.

This watch was custom made for me, and it is fashioned after a original Seiko dive watch called the "Tuna Can" because of the reinforcement shroud that surrounds the watch body and bezel.

My watch has this same "Tuna Can" build, with the stainless steel shroud that was fitted to the watch case as shown in my photo.
Because I like mechanical powered watches, I had my watch built with a mechanical Seiko hacking movement, and the date window located in the 4 o'clock position.

For those of you who don't know what a "hacking movement" is....Its a movement whereby the seconds hand can be stopped for exact setting of the time to the second. Originally a military term for this feature.

The custom faceplate with its "kanji" symbol loosely translates to "Tuna Can." and although the display is luminous in the dark, it is not as good as the Tritium gas tube display of one of my true military issue watches that I also wear at times.

Tritium gas tube powered displays are amazing to see in the dark, although they are marked with a radiation propeller on the face of the watch, due to the fact they are radioactive, and the life expectancy of the tubes dimish somewhat after 10 to 25 years.

Also shown is the watch mounted on my favorite type of watch strap, a "Nato" watch strap, which replaced the original strap that the watch was supplied with.


The NATO designation has very little to do with the North Atlantic Treaty Organization. The sturdy-yet-flexible nylon straps that we’ve come to call NATO straps were actually a distinctly British invention.

The British armed forces needed a standard issue watch strap for their service members. The military brass chose a nylon weave because it exhibited both durability and flexibility without sacrificing performance in wet or otherwise dirty conditions. The strap came to be known at the “G10 strap,” so named because of the simple form a service member would have to fill out to be issued one.


Throughout much of the Cold War era, the strap was as much a part of the standard British military uniform as the boots or the helmet. It was so ubiquitous in British military and defense circles that Sean Connery’s James Bond character can be seen sporting a NATO strap in several of his movies. And if it was good enough for the Queen’s suave secret agent, it was certainly good enough for regular folks.


NATO straps began popping up in military surplus shops toward the end of the Cold War, where the NATO designation seems to have first appeared in the form of a NATO Surplus Number attached to each strap. The general public soon became hooked. It was the kind of strap that could excel equally in the business world, at social gatherings, and in the outdoors on the weekends.


When surplus stores ran out, many manufacturers discovered that they could make money recreating the original military-grade straps. And thus, an industry was born.


Like I said...I love my Nato watch straps, and all my wristwatches sport a Nato strap as seen on my watch that resides on my wrist in the photo.