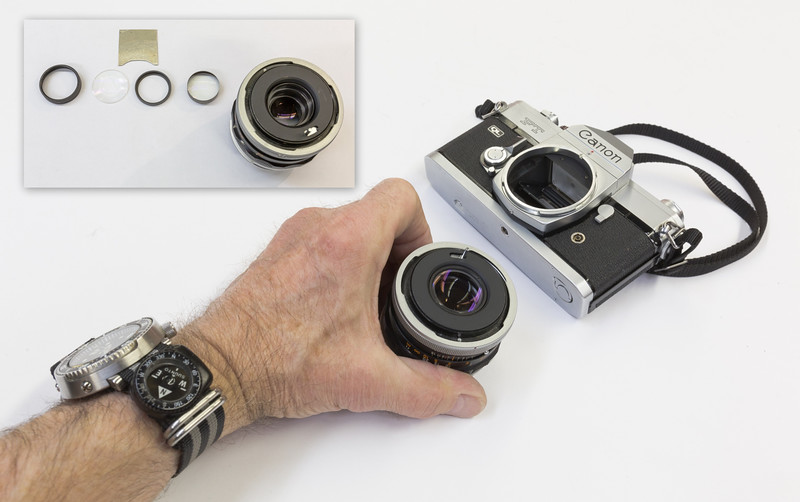 Recently I decided it would be fun to shoot some black and white film with my vintage Canon FTB 35mm camera, the first SLR camera I ever owned.
The last time that this camera had been used was probably 18 years ago, when my daughter Jennifer at the age of 12 decided that she should learn photography.

Now at the time, digital cameras were not commonly used yet, and I was still shooting with film cameras myself. Under my guidance, Jennifer acquired good photography skills using this camera, and the desire to move forward with those skills stayed with her through high-school when she then went to SAIT (Southern Alberta Institute of Technology) for several years, studying to become a photojournalist.
That was where she switched over to DSLR's (Digital single lens reflex), as it was required when she enrolled in the program. I also followed her down that path, acquiring my first DSLR as well.

Meanwhile, through all this, the Canon FTB languished on a shelf for 18 years developed a case of fungus on several of the internal elements of the stock 50mm lens.
There’s nothing quite so frustrating as discovering a lens you own has developed a bad growth of fungus on the internal elements. Lens fungus is commonly found in older lenses. It is indiscriminate of brand, build-quality, or price tag. If humidity stays in your lens for too long, the dreaded fungus may appear, and that's exactly what I discovered had happened with the 50mm lens stock lens that resides on my Canon FTB.

Now I could have taken the lens in to a camera repair shop, but decided to tackle the job myself.
The first issue was the needed specialty adjustable lens wrench that allows the locking-ring securing the back element in place to be removed.
Although I could of ordered one off Amazon, I realized I could make a simple tool out of stainless steel material as shown in the insert photo, profiled to the dimensions measured from the locking ring holding the rear element in place on the lens.

This allowed me to unscrew the rear locking-ring quite easily. If you attempt to clean one of your own lens, pay close attention to the convex/concave shape of the glass so that you have no doubts as to how they will be orientated when you go to put it all back together.
This lens group has a spacer ring between the rear most element and the inner element. To remove it, I simply tipped the lens into my hand, and the rear element fell out of its mount. It's possible that you may need to bump the front of the lens to get the element all the way out of its mounting. Be careful as sometimes the inner element will come along with it. In this case it did not until I removed the inner ring.
With both elements removed, and discovering that all the fungus was on these two elements, I proceeded to clean them.
With equal amounts of hydrogen peroxide and ammonia (a cap full of each) mixed in with 10 ml of water, I let the elements soak in this mixture for 10 minutes. At that point the elements were clear with the fungus gone.
I then took the elements over to the sink and ran water over them. Once the solution had been rinsed off, I used a lens blower to blow away all the water droplets. With the water gone, I used a clean microfiber cloth to lightly wipe the elements.

After inspecting the two elements under a light from different angles of light to be sure that all the fungus was gone, and that there was no dust or smudges on the glass surfaces, I commenced with the reassembly.
Working backwards, I reinstalled the rear element group, and a final inspection showed they were crystal clear, the way they should be.