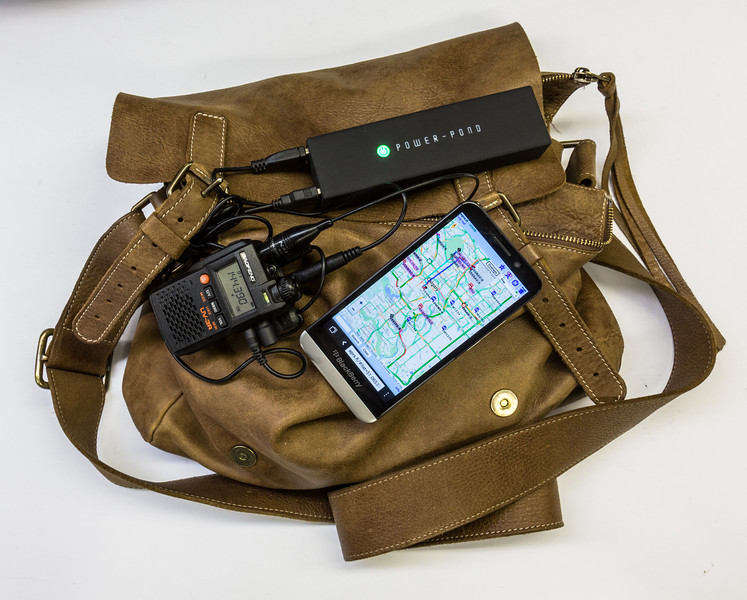 Recharging Your Devices On The Fly

Like most of you I have many ways of charging the many devices that I carry with me on a daily bases, whether at home, my work, or in my mobile.

Now on any given day I carry my smartphone and several HT's that includes my UV-3R/Mobilinkd TNC Bluetooth device in my messenger bag.
Realizing that I needed a charging device that would reside in my messenger bag, I started doing research and with a short-list I went shopping.

For the record the smartphone pictured here has a 2900mAh battery. With that in mind I decided that a battery-pack rated at 5000-6000mAh would be capable of replenishing the charge of the battery in my smartphone with reserves.

Well after I arrived home with the first device that I purchased, I discovered that it was not up to the task at hand as it took way too long to replenish the charge of my smartphone battery.
So with that in mind I decided that I needed a device with a much higher capacity, and the POWER-POND-4C has proven to be that device.

The POWER-POND-4C with a 12,000mAh rating is proving to be exactly what I was looking for in a compact charging device.
The PP has two USB 5 volt 2 amp outlets, so therefore it is capable of charging two devices simultaneously as seen here.
Not visible in the photo, are the two inputs on the opposite end, one that is a micro USB rated at 1amp, with a second input in the form of a mini USB rated at 2 amps.
This device may be charged from any USB outlet, or with the included 2 amp USB wall wart charger.

The POWER-POND charging device is capable of charging all three of these devices multiple times before itself requires recharging.