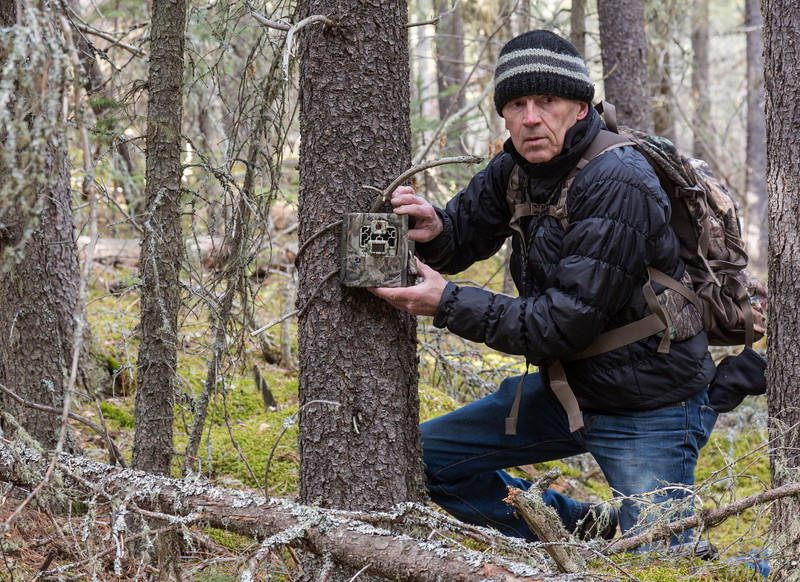 This photo shows me in the process of setting up one of my trail cameras, making sure that everything is set as it should be.
After all, I will leave any one of my 3 trail cameras in place for anywhere from a month to six weeks, so it won't do to discover 6 weeks down the road that you had the settings wrong, or the camera turned off!

Well turned off would be to the extreme, as I always check a couple of photos after setting up my trail cams to see what the exposures look like.
This is important, as there is always the possibility that the images being captured are over or under exposed, depending what the camera exposure settings are set for, as light or dark surroundings can influence the exposure meter built into the camera.
I also check the first photo captured to look the shooting lane over for the potential of tree branches, leaves, or grass that can be blown about by wind, causing the camera to activate with the result being a bunch of images with nothing on them other than the same landscape photo.
Its also important to pay attention as to what effect the sun will have on your photos when the sun rises and sets.
If there is the potential for sunlight to flood the lens of the camera, this will have a effect on the captures that are shot when the sun is low in the sky.
If possible trail cameras should be placed looking north, although this is not always possible.

And then there is always a situation like I had at another location where a squirrel lived in a nearby tree that was situated in the shooting lane for my trail cam set up nearby.
The result was a whole bunch of nightly visits by the squirrel that were captured on video!
Mind you it wasn't all bad, as I got a lot of good captures of other wildlife besides the squirrel.
Interestingly enough, and because the trail cam recorded the time of the nightly visit by the squirrel, he made his nightly appearance at almost the precise time each night.
The fact that each photo taken or video captured is time-stamped is very informative as to the movement of the wildlife passing through the shooting lane of my trail cams.

All my trail cams record the time, the barometric pressure, the temperature, and geo-tag all captures at time of activation.

I selected this location for this trail cam, as it overlooks a game trail that appears to be used regularly, so we will see what I capture with this trail cam set to shoot video files.

The daytime video captured is shot in color, and the video shot at night is shot in black and white.
The video shot at night is captured with the help of 42 black LED's that are invisible to both wildlife and people, but give flash coverage out to about 70 feet.
All my trail cams are the stealth type with black LED's for flash exposure, and can be used for surveillance equally as well as for photographing wildlife.

Its can be entertaining to set up a trail camera overlooking your campsite at night, giving you an idea as to what or who is visiting while your sleeping.
Mind you be aware that you may give up camping in a tent if you do this, as you might find it somewhat unsettling to see who comes smelling around your tent while your snoring in your sleeping bag, especially in bear country.

How track-back finds your location.....
http://www.jerryclement.ca/HamRadio/HamRadio/i-fNg5zpk