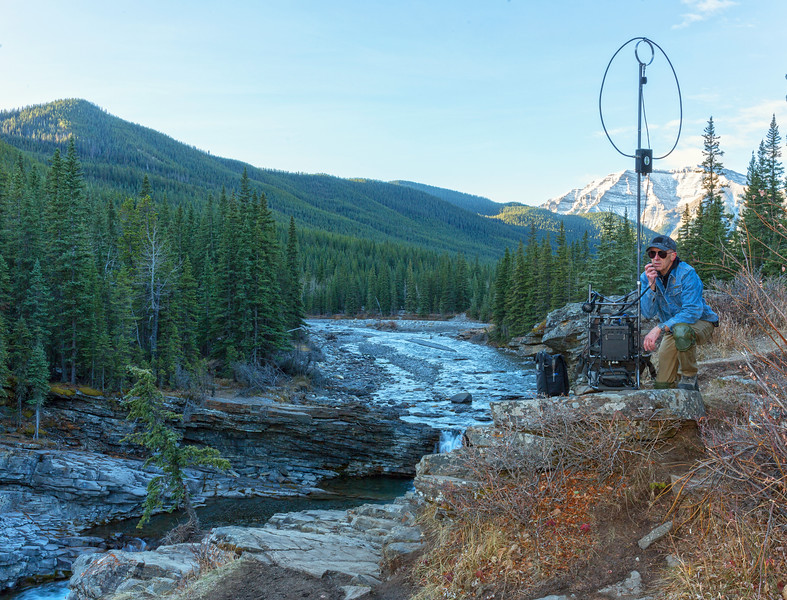 With my mobile parked at the end of the road approximately a kilometer away from my location as seen here overlooking the Sheep River west of Turner Valley AB, I thought this would be a good spot to set up my manpack, with views to the southeast clear to the far horizon a distance of approximately 30 kilometers.
I'm set up to work 20 meters on this morning with the bands shaping up quite nicely in to the southeastern US,and some activity in eastern Canada also being heard.

Its been a while since I've had my portable 10-60 meter vertical antenna along with me, as this tiny mag loop with it's relative freedom from dependence on a ground plane and earth for achieving efficient operation is proving to be quite refreshing from the need to lay out ground radials for the vertical antenna that I normally use with my manpack.

Now its not all a bed of roses, with the Q of the mag-loop being quite high, the bandwith is very narrow requiring that you constantly retune with the variable capacitor whenever its required that you move outside of the narrow working bandwidth of the mag loop.

In the case of the mag-loop shown here, built to cover the bands of 10-40 meters, I must be content with a bandwidth 0f approximately 40 kHz when working a frequency I've chosen to work in that segment of 20 meters, and as I move away from my resonant frequency, its required that I re-adjust the variable capacitor.
The working bandwidth on 40 meters is narrower yet, being approximately 20 kHz without retuning the variable capacitor when moving away from the resonant frequency you started with initially.

Having said that, I still find the mag-loop to be a terrific small antenna, as it is proving to be highly efficient in comparison to the portable vertical antenna that I normally use with my manpack, and although the vertical has a wider working bandwidth, it is not as efficient as the mag-loop, at least on the higher bands.

With the mag-loop mounted on the manpack as seen in the photo, the antenna is vertically polarized and has fairly sharp nulls along the axis of the loop, with the radiation pattern peaks lying in the plane of the loop, so I'm finding the antenna is proving to be somewhat directional, depending on the distance of the signal being received and worked.
Of course to maximize the signal being received, its as simple as turning the mast to rotate the antenna while watching the S meter on the front panel of the transceiver.

Although I haven't run many tests with the antenna set up and being used where there is electrical interference present, I'm finding that the antenna is capable of ignoring electric-field noise from nearby sources, making the mag loop antenna a good choice if you are dealing with high noise levels.

Of course it goes without saying that there was no electrical noise to contend with on this morning, and during the time I spent in the backcountry over the morning, and with the bands (20m and 40m) open, I enjoyed making several stops to set up, and with the mag-loop simple to assemble and disassemble, I found I could be working stations within several minutes of stopping and setting up.

So with testing of the mag-loop antenna continuing, the antenna is proving to be a good choice as a portable antenna while working HF from the backcountry.

If you missed it, here's a description on the mag loop.... http://www.jerryclement.ca/MachineShop/Antenna-Werks/i-WHQvdc5