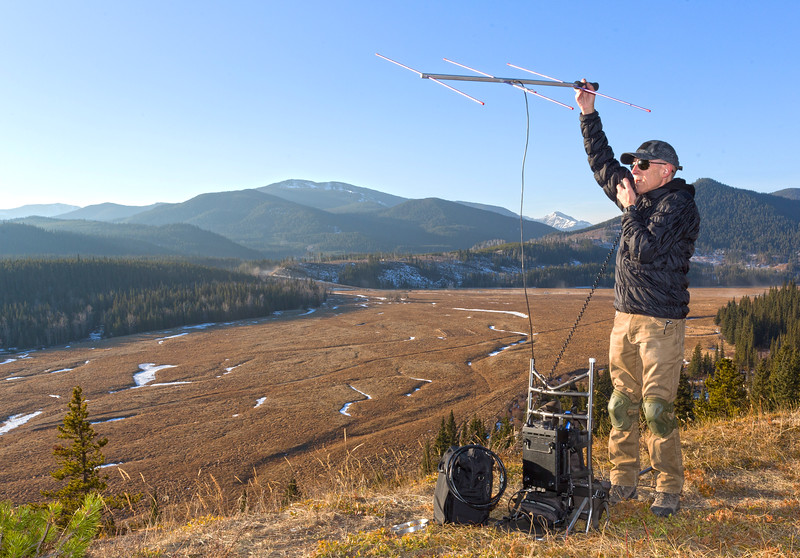 So back several days ago it was decided that we (the wife and I) should go out to the forestry and cut a Christmas tree. It had been years since we did this as a family, and the last time that would have happened was when my daughter was a kid living at home.

Several days ago Ian VE6IXD let the local ham community know that he would be activating the summit of Mt. Yamnuska located west of Calgary along the front ranges of the Rockies.
I thought...."well so much for acting as a chaser and making contact with Ian", as the plan was for me to be riding with my wife in her vehicle, leaving my mobile at home as it has no room for hauling a tree.
Then I realized that I could take my manpack along in my wife's SUV, and once we reached the tree-cutting area, I should be able to work Ian VE6IXD on the summit of Mt. Yamnuska at the appropriate time.

Now Ian had said that he would be calling on 146.520 FM, and he also would give call on 144.200 SSB. Now normally if I'm taking my manpack, its always loaded with either my 10-60 meter HF vertical, or my 10-40 meter magloop as it was on this day.
Looking at my options, for a change of pace I decided to take my Arrow 2 meter takedown antenna along, as I have never paired it with my FT-897D before, and I thought this would be the perfect opportunity to see how it performed with the FT-897D on internal batteries driving 20 watts into this 3 element yagi, while operating on 2 meter FM, and then on 2 meter SSB.

I must say that I enjoyed working Ian from his location on the summit of Mt. Yamnuska, getting to try out this combination of my manpack and the Arrow antenna as seen in the above photo.
Ian was actually using a vertical antenna, and I did make the initial contacts with the arrow held in the vertical position.
I then ran a few experiments changing the orientation of the Arrow while listening to some of the guys in Calgary who were making FM and SSB contacts with Ian on Mt. Yamnuska.

So all-in-all it was a fun day out in the mountains chasing after a Christmas tree, and getting to play radio at the same time.

On another note, the photo tells no lies, as there basically is no snow to speak of, unless you go further west into the Rockies. Oh.....the temperature reached 12 Celsius later in the day.
Does it get any better in the Northern Rockies in the month of December..... I think not.

Of course my kid will be mad when she arrives home for Christmas from Vancouver, if there is no snow on the ground! We'll plan a trip for further into the Rockies to find her snow if required.