This gallery has my covers, articles and mentions that have appeared on or in the pages of QST beginning with the latest.
The selected photo may be expanded full screen.
Read More 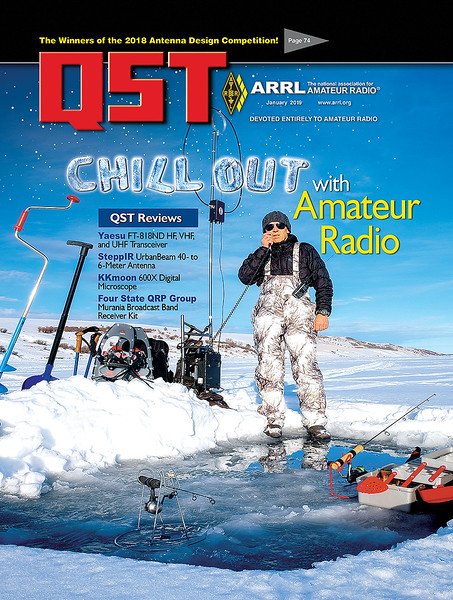 I shot the front cover of the January 2019 issue of QST while out on the ice of Chain Lakes located southwest of Calgary AB.

The plan was to combine some ice fishing with making contacts on HF through the use of my Yaesu FT-897D connected up to one of my recently built Mag Loop antennas.

Because the 897 running on internal batteries is limited to 20 watts out, and after doing some research as to what was available for a variable capacitor, I found one rated for 25 watts out.
This variable capacitor is a very nice build with a geared 6-1 front end making for very fine adjustments when tuning the MLA.

Because the primary loop had to break down for storage, I decided to build it from LMR 400 coax cable, as it coils readily when removed from the main housing for storage, yet retains a nice round footprint when assembled..
I should mention that I decided upon starting this project that I wanted the MLA to be fairly compact, and for that reason, I designed the MLA to cover 10 through 40 meters. with the main loop measuring 36" in diameter when assembled.

The mast parts were made from non-conductive composite material, and the joint connectors I made from white Delrin.
The lower 36" mast section that mounts on the frame of the manpack, is also made from the same composite material as the loop support components, and supports the MLA when set up for operation .

The feed loop where the SO-239 connector resides for the transceiver to connect to, is constructed from flat bar-stock aluminum, and this also was by design so that when assembled the mast and the feed loop along with the control box become a ridged assembly to which the main loop mounts to and holds its form.
Of course there was a lot of one off pieces formed in my workshop, and the one component you see that resides at the very top of the feed loop was formed from Delrin, and has a channel cut in at the very top that the LMR 400 primary loop drops in to upon assembly of the antenna.
The lower portion has a 3/8x16 tpi thread that screws in to the feed loop, allowing for the SWR to be adjusted by varying the space that resides between the feed loop and the primary loop.

So now you know the rest of the story, well not quite, as I didn't catch any fish on this day, but certainly had fun playing radio!

A closer look at the antenna...….
https://www.jerryclement.ca/MachineShop/Antenna-Werks/i-WHQvdc5

Another view in real time.....
https://www.jerryclement.ca/HamRadio/VE6AB-Portable-OPS/