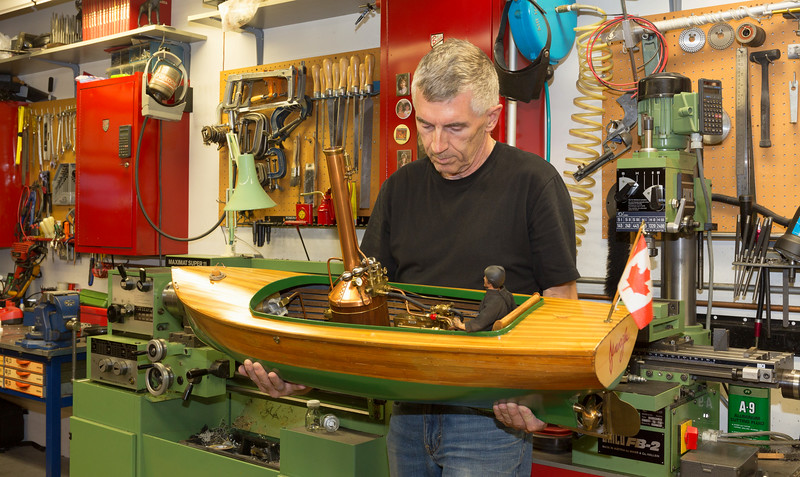 This photo finds me in my workshop examining the miniature steam launch "Jennifer" (named after my daughter) that I designed and built in my shop.
This miniature steam launch is modeled after the typical full scale 1890's steam launch of the day, and although scaled down in size. It has a propane fired boiler, a working two cylinder steam engine, several on-board water pumps......well lets go through it.....

The steam launch is 42 inches in length and has a beam of 13 inches, and draws 5" when in the water. The steam launch weighs 35 pounds and took 2 years to build. With a full head of steam the model has a very realistic look and you must step it up to keep up with the model while it is underway in the water. The hull is all laid up cedar planking over plywood bulkheads. All the planks were stripped on my restored vintage "Atlas" tablesaw.
The deck consists of spruce and cedar planks with black tar-paper separating the planks for appearance. All the planks are glued and doweled in place with round toothpicks used for the dowels. The hull was finished with green paint below the waterline, and many coats of varathane over the complete hull.

I used a rosebud heating tip with my acetylene outfit to generate the heat required to silver solder this assembly with 45% silver-solder. Once the assembly was completed, the boiler was pressure tested at 3 time the working pressure, before the boiler was fired for the first time.
The boiler is propane fired with burner burn rate controlled by boiler pressure. Pilot light relights burner if flow of propane is shut down due to high boiler pressure. the main burner has a spark lighter.

This steam launch has many interesting features, including the oil injector that is mounted on the steam inlet to the engine. A good quality steam oil is used in the lubricator to lubricate the internal engine parts while under steam power, and mounted in front of the boiler is a oil separator that separates the used lubricating oil from the condensates that exit the engine and are expelled through the smoke stack.

Beneath the foot rest in front of the seat, is the water pump that is powered with a gear-driven jack shaft off of the propeller shaft.
The propeller-shaft is supported by two needle-roller-bearings, in a grease-packed brass-tube, that exits through the hull. This water pump provides lake water pumped through a inlet in the hull and is piped to the boiler via a line that has a check valve in place, so that the boiler pressure is kept away from the water pump.

There is another water pump on the other side of the engine that is hand-powered and is used to pump water into the boiler as the boiler is initially being steamed and water is required to fill the boiler. The line from this pump also has a check valve in place in the line. Both lines from their respective pumps can be seen just over top of the engine. The line visible at the extreme top of the engine is the main steam line that runs from the boiler to the engine. This line includes a steam throttle that is visible and the linkage that is attached is connected to a steering servo behind the seat.

I have barely touched on all the devices that are part of the overall system that need to be checked, including the numerous check valves and globe valves mounted everywhere in the steam lines.
Mounted under the upper boiler dome is a working feed water heater that preheats the water entering the boiler, and a super heater that superheats the steam entering the engine through the steam throttle allowing the 2 cylinder steam engine to operate more efficiently.

One of the more interesting builds that went in to this steam launch is the 4 bladed propeller that moves the launch through the water.
Initially, I did not really put much thought into the propeller, and going through a selection of propellers I had lying around from the radio controlled model gas powered boats that I built at one time or another, I choose a propeller that looked about the right size. Well, wouldn't you know it, when I steamed the launch for the first time, I could not keep a head of steam up. I quickly realized that the pitch of the propeller which was meant for a fast turning gasoline engine was to fine a pitch for a steam engine..

Back in my shop, I did the work-up that should have been done initially, as I realized that I needed a propeller with a pitch meant for a slow turning steam engine, I rolled up my sleeves and went to work constructing a steam boat propeller. The propeller is 2.5" in diameter, and with a very coarse pitch that is suited to a slow turning high torque steam engine. With the propeller completed and the launch back in the water, it was a whole new ballgame.

With 30 psi showing on the pressure gauge and the throttle wide open, you need to not quite break in to a run to keep up to the launch as it moves along at top speed, and the good thing is that the boiler can maintain a head of steam while doing this.

Now another thing that needs to happen before I go much further, is to construct a test tank to float the steam launch in while sitting outside on my driveway.
At one time I had built a test tank from galvanized sheet metal, but somewhere along the line my wife started using the test tank for a flower pot, Nice!
The tank having seen better days needs to be replaced, so that's the first order of business .
Why the test tank you ask, well there is too much going on in the launch to allow it to be operated out on the water of my local pond, without first running it where I can keep a close watch on the numerous things going on within the launch, like boiler pressure, making sure the safety valves are working correctly, the propane control valve that controls the flow of propane from the tank to the burner is regulating properly.

To give you some idea how big this miniature steam launch is, as the photo does not really show its true size, the propane tank used to fire the burner under the boiler is mounted in the bow of the launch, and is the typical 1 pound disposable cylinder. You can just see the valve on the tank at the front of the launch if you look close by expanding the photo further by clicking on it.

The servo-tray that the remote control radio system is mounted on, is mounted in the stern behind the seat that is removable to access the radio system.
This makes the servos and receiver a pain to access, but makes for a very scale looking steam launch with no modern day convinces visible spoiling the appearance of what could be a full size 1890's steam launch if the model were to be scaled up.

About the only device that I didn't build in my machine shop other that the propane cylinder and valve, and the radio system to control the launch, is the miniature steam gauge that I purchased from a firm in the UK that builds them.
This tiny steam gauge measures 3/4" in diameter, and it displays the pressure of the boiler, a very important requirement when firing boilers of any scale.

So that's where its at, a one of a kind miniature 1890's steam-launch, as you see it here.